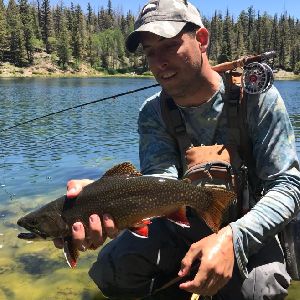 Chad enlisted in the United State Marine Corps at the age of 18, and now resides in Orange County, California, where he is the owner of Schiel Wealth Management.

After his military carrier aboard Camp Pendleton, he moved to Colorado where he worked as a fly fishing Guide in the Rocky Mountain’s while earning his degrees from Regis University. He continues to spend a great deal of time instructing new anglers, developing warm water fly fishing tactics and designing new fly patterns.

Chad has caught over 80 species of fish on a fly rod around the globe! His fly patterns and stories have been featured in almost every major fly fishing publication as well as having been featured on several fly fishing television shows. Chad’s deepwater bass flies available from Rainy’s Flies have contributed to several wins in the notorious Bass-N-Fly tournament over the course of the past 10 years.